This Newrange Gold Corp. profile is part of a paid investor education campaign.*

Newrange Gold Corp. (TSXV:NRG, OTCQB:NRGOF, Frankfurt:X6C) is a mineral exploration and development company based in Vancouver, British Columbia, Canada. The company is focused on the acquisition and development of mineral properties with near term resource and mine development potential in highly favorable jurisdictions.

In Nevada, Newrange Gold holds the Pamlico high-grade gold project located in Mineral County. The property is notable for its historic high-grade underground gold production at the Pamlico mine, which was operated in the late 1880s. Newrange’s drilling at the site has returned results of 6.1 meters grading 97.94 g/t gold including 1.5 meters at 340.9 g/t gold.

Since acquiring the project in 2016, Newrange Gold has conducted extensive exploration work focused primarily on the Merritt zone including surface and underground mapping and sampling, surveys and three phases of drilling covering 47 holes. The company has also completed structural interpretation and 3D modelling from the drilling data. The Merritt area represents less than one half of one percent of the entire property and the company’s goal is to replicate its modeling of the complex mineralization across the property.

Newrange Gold’s current exploration work is focused on developing a maiden resource estimate for the property, which is expected to be released in early H2 2019. The company is currently completing an extensive exploration program comprised of underground surveying, mapping and sampling, drilling, trenching, surface mapping and sampling, a bulk sampling and metallurgical studies.

Through the company’s metallurgical testing, Newrange Gold has determined that the Pamlico project has high gold recovery rates of up to 97.1 percent across all grade ranges. The mineralization is amenable to heap leach processing, which would result in a smaller processing facility. This would significantly reduce permitting requirements as well as CAPEX and OPEX costs, if the property is put into production.

The Pamlico gold project is located 12 miles southeast of Hawthorne, Nevada in the Walker Lane gold trend, one of Nevada’s largest and most productive gold regions. The property covers 1,670 hectares and includes a number of historic past-producing mines. 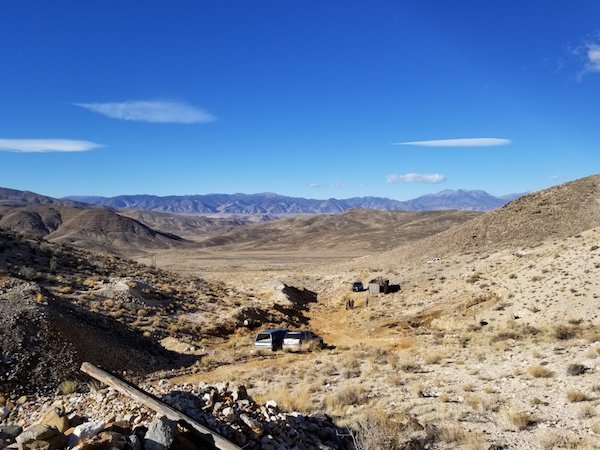 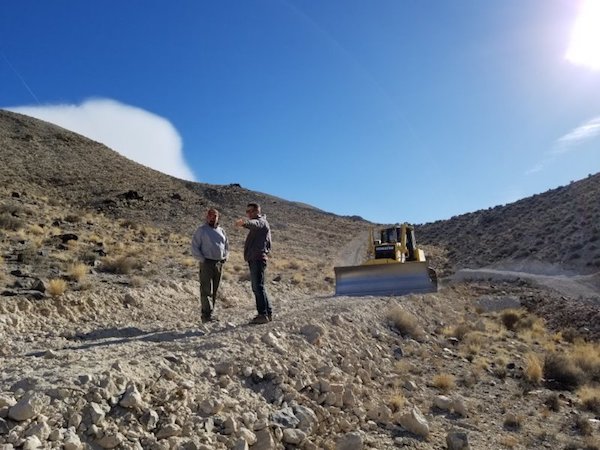 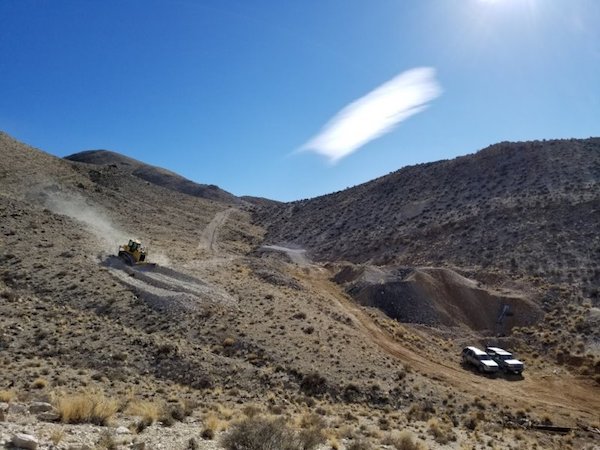 Visible gold dominates the high-grade mineralization which occurs in thoroughly oxidized and brecciated quartz veins. A total of 103 drill holes (8,487 meters) were completed on the property between 1993 and 2010, by three previous operators. Numerous historic drill holes contain high grade gold intercepts. Highlights are included in the table below.

Note: Intercepts are average of all samples in drilled intercept length with no grade capping applied. All intercepts are drilled length. True widths are unknown. 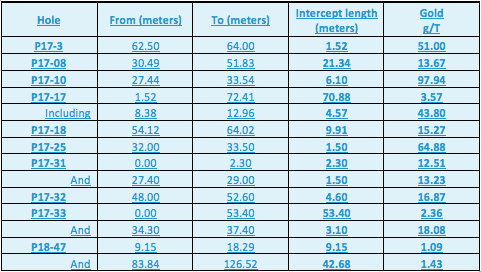 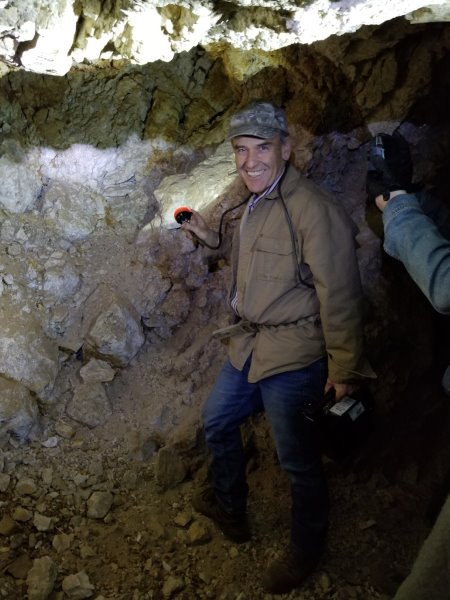 Work prior to Newrange Gold’s acquisition included the completion of 29 rotary holes in 2010, a 198-meter-long, three-meter by four-meter decline to one of the high-grade zones in 2013, haul road, initial permitting and all necessary surface and underground infrastructure including shops and office buildings. The decline, completed in 2013, was advanced to within 25 feet of high-grade drill indicated mineralization. Two previously unknown gold zones were discovered by Newrange Gold while sampling. Both contain high-grade, but ultra-fine, gold in brecciated vein material with abundant iron oxides with 1.5-meter channel samples returning values in excess of 100 g/t gold. 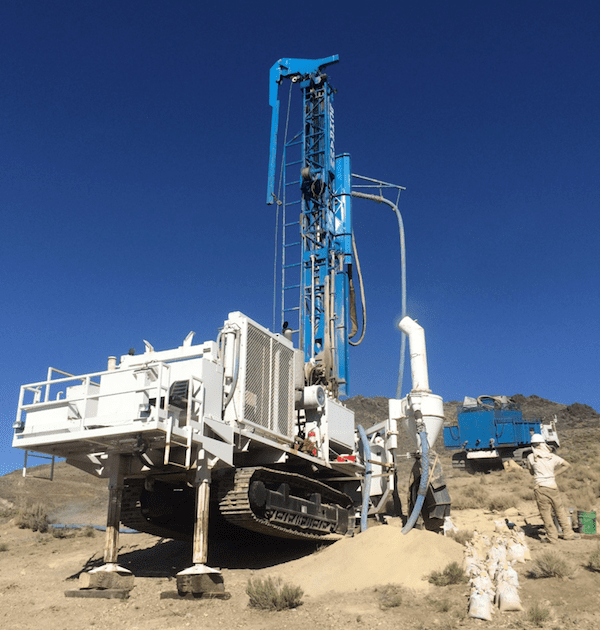 Newrange Gold has conducted numerous phases of exploration at the Pamlico project. The first comprised diamond saw cut channel sampling in the Merritt decline, across a continuous 32-meter interval. Assays from the interval showed high-grade results of 17.25 g/t gold over 13.8 meters including 4.6 meters of 26.46 g/t gold. Results also included 1.5 meters of 36.9 g/t gold from one zone and a second zone with 4.6 meters of 10.48 g/t gold. The sampling program more than doubled the extent of the mineralization and identified concrete drilling targets for the Merritt decline area.

Newrange Gold launched the second phase of drilling in September 2017 with the goal of expanding mineralization further and drill testing targets identified through mapping and sampling. The program covered 10,000 meters of drilling and uncovered two new high-grade gold zones: the K-zone and N-zone, which were identified as near-surface, oxide gold zones. The K-zone presented drill intercepts including 16.78 g/t gold over 4.6 meters. Meanwhile, the N-zone, parallel to the Merritt zone, presented results of 12.6 g/t gold over 3.0 meters and 4.19 g/t gold over 21.3 meters. Once all results were reported for Phase II, Newrange Gold confirmed that they had six large, high-potential exploration areas on the project.

Following new targets identified through geophysical surveys, Newrange Gold launched its third phase of drilling in February 2018, focusing on the newly identified Tom’s Hammer zone. This phase was focused on working towards developing a resource estimate for the project and gathering metallurgical sampling to determine the ideal metallurgical recovery method. Results reported in July 2018 extended the mineralized gold trend to approximately 1,600 feet on strike from the Merritt decline area. Results from the program included 39.6 meters of 1.48 g/t gold and 86.9 meters of 0.578 g/t gold including 25.9 meters of 1.021 g/t gold. 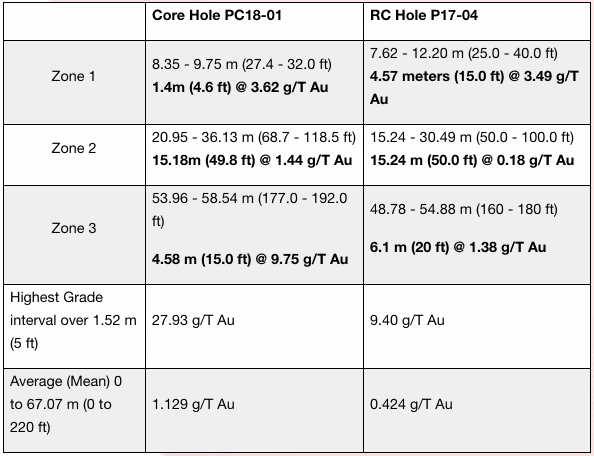 After testing was completed on the core samples, all three twinned holes with the RC holes contained intervals of fine-grained, low-grade gold mineralization. The testing showed that there are good correlations between the drilling methods, but that the high-grade assays were not comparable. In light of the results, Newrange Gold has decided to continue to use RC drilling due to its lower costs and intends to only use core drilling where additional geological information is required.

In an area 280 meters southeast of the Merritt area, underground channel sampling from the 5471-level at the Pamlico mine returned a composite interval of 41.1 meters grading on average 1.26 g/t gold. Other notable results from the program include samples that range between 0.5 g/t gold and 23.8 g/t gold. The channel samples within the 5471-level sampling range from 0.33 to 1.52 meters and average 1.1 meters in length, with grades ranging from 0.06 g/t gold to 8.20 g/t gold.

Newrange Gold used a handheld LIDAR scanner to create a 3D model of the 8,000 meters of underground workings at the property. The company then promptly applied for and received its permits to conduct a bulk sampling program and underground development work.

During its underground exploration program, Newrange Gold identified the source of high-grade gold and silver in the historic Good Hope mine. The discovery channel sample weighed an average of 13.89 g/t gold and 71.19 g/t silver over 40 meters in the 5690-level of the mine. Samples taken from the footwall and hanging wall areas from the same 40 meters averaged 4.96 g/t gold and 42.24 g/t silver. The zone remains open along strike and down dip.

Underground channel sampling between the 5570 and 5518 levels of the Good Hope Mine has confirmed continuous gold and silver mineralization. Results released in October 2019 showed a higher-grade core of mineralization averaging 4.08 grams g/t gold and 51.5 g/t silver ranging from 0.3 to 1.0 meter wide, with an average width of 0.7 meters, within a larger mineralized envelope that averages 1.2 g/t gold and 21.8 g/t silver.

Throughout the remainder of 2019, Newrange Gold intends to complete additional underground surveying, mapping, sampling, drilling and trenching at the Pediment zone. The company also intends to continue surface mapping and sampling, a bulk sample program in the Merritt decline and to continue its metallurgical studies.

In December 2018, Newrange Gold received results from its cyanide shake assays. The results indicated that the mineralization at Pamlico is highly consistent and favorable to the extraction of gold throughout the drilled area and could be amendable to heap leaching. The report also outlined that gold mineralization containing less than 4 g/t gold could possibly be recovered using heap leach extraction while higher-grade mineralization should also be evaluated for conventional milling.

“These results are better than we could have possibly hoped for at this early stage, supporting our opinion that the gold is very fine, mostly microscopic and that there are no apparent metallurgical challenges at Pamlico. To our delight, the calculated (or actual) head grade for the three lower grade composite samples was substantially higher than the predicted grade indicated by the original drill sample assays and suggests potential for a much larger and potentially heap leachable gold system than previously contemplated at Pamlico,” said Newrange Gold President and Chairman Robert Carrington.

“Although further testing is required, the implications of this preliminary test are significant,” said Newrange Gold CEO Robert Archer. “By implementing simple, low cost screening and concentrating approximately 80 percent of the gold in less than 13 percent of the sample weight, it may be possible to eliminate a crushing circuit altogether, to mine large volumes of low-grade mineralization, and substantially reduce the volume of material to be processed. This, in turn, would result in a smaller processing facility, materially reducing permitting requirements, CapEx and OpEx costs. Furthermore, it indicates the potential to deliver higher grade feed to a processing facility, thereby allowing more intense treatment of higher-grade material, which could result in higher extraction and recovery rates.”

Robert Archer has more than 35 years’ experience in the mining industry, working throughout North America and Peru. After spending more than 15 years with major mining companies, he held several senior management positions in the junior mining sector and co-founded Great Panther Silver Limited, an emerging mid-tier precious metals producer. He served as President & CEO of Great Panther until August 2017 and remains on the Board of Directors. Mr. Archer has been a shareholder of Newrange for many years and took a more active role by joining the Board of Directors in March 2018. He is a Professional Geologist (registered in British Columbia) and holds an Honours BSc from Laurentian University in Sudbury, Ontario.

Robert Carrington has over thirty years’ experience in all facets of the exploration and mining industry, as well as in production and executive management. He is the former CEO, Director, of Gold Canyon Resources, and the founder of Newrange Gold.

David Cross is a Certified General Accountant and is a partner in the CGA firm of Cross Davis & Company LLP. Cross began his accounting career in 1997 and obtained his CGA designation in 2004.

Ron Schmitz has extensive experience in the governance of junior sector companies, a strong financial background and currently on the boards of Blackbird Energy Inc. and Black Lion Capital Corp.

Paul Wang has an extensive banking and financial background specializing in natural resource, mergers and acquisitions.

David Salari is a Professional Metallurgical Engineer with more than 30 years of experience. He has been involved in the design, supply, and commissioning of mining and mineral processing systems throughout the world for gold and silver, base metals, and industrial minerals.

Born and raised in Medellin, Colombia, Gloria Carrington studied law at the University of Medellin and has an extensive business and legal background in Colombia.

*Disclaimer: The profile provides information which was sourced and approved by Newrange Gold Corp. (TSXV:NRG, OTCQB:NRGOF, Frankfurt:X6C) in order to help investors learn more about the company. Newrange Gold Corp. is a client of the Investing News Network (INN). The company’s campaign fees pay for INN to create and update this profile page, to which links are placed on Investingnews.com and channel newsletters.