Delivering Value with a Track Record of Discovery

This Golden Arrow Resources profile is part of a paid investor education campaign.*

Golden Arrow Resources is actively exploring a portfolio of projects that includes its new epithermal Flecha de Oro project in Argentina, its district-scale frontier Tierra Dora gold project in Paraguay, its Rosales base-metal project in the heart of Chile and more than 180,000 hectares of properties in Argentina.

Golden Arrow Resources is managed by the Grosso Group, which has pioneered mining exploration in Argentina and helped contribute to operational policies in the country, specifically those regarding environmental compliance and community relations. The Grosso Group has 27 years of experience with 100-percent acceptance from local governments and stakeholders.

Golden Arrow Resources intends to pursue a two-prong strategy that informs its operations. Firstly, the company intends to continue to expand its precious metals and base metals properties, especially those with economic mineralization. Secondly, Golden Arrow intends to follow a five-step development plan in order to advance its discoveries to the preliminary economic assessment (PEA) or pre-feasibility study (PFS) stage.

The project is relatively under-explored with geological characteristics that resemble those found at orogenic-type gold deposits. Golden Arrow has established multiple drill targets at Tierra Dorada, specifically in areas with flat topography and sparse outcrop.

Due diligence sampling conducted by Golden Arrow at the Tierra Dorada project including rock chip assays returned between 3.3 and 15.1 g/t gold from a 2.5-kilometer trend of sub-outcropping quartz veins. Visible gold was also observed on the property. 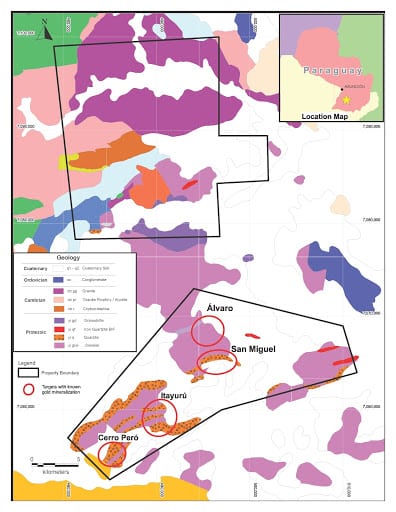 San Miguel, the most advanced of the four targets, includes two parallel northeast trends approximately three kilometers in length. Historical exploration has been conducted on the property including soil and rock sampling.

Historical highlights from the San Miguel target include:

Moving forward, Golden Arrow Resources intends to continue to explore the four main showings at the Alvaro target. The company has contacted Quantec Geoscience to perform an IP Gradient array survey at the Alvaro target area as part of Golden Arrow’s 2020 exploration program. The company continues to conduct regional mapping, stream and rock sampling at both the north and south property blocks of the project.

Golden Arrow Resources’ Flecha de Oro project is made up of two properties in Argentina’s Rio Negro Province, the Puzzle and La Esperanza exploration properties. The project was acquired in December 2019 through a definitive option agreement.

In March 2020 Golden Arrow Resources announced the additional results from its 2019 exploration program at Flecha de Oro, including results from both Puzzle and Esperanza. Sampling and mapping conducted at the Esperanza property identified visible high-grade gold hosted in epithermal quartz veins, including four chip samples that returned 18.00 g/t, 5.05 g/t, 4.12 g/t and 4.10 g/t gold. At the Puzzle property, Golden Arrow Resources continued to explore a 2.3-kilometer area of mineralization that had previously shown gold-mineralized quartz veins and adjacent stockwork.

In July 2020 Golden Arrow Resources expanded the Flecha de Oro project by entering into an option agreement for a new area called Maquinchao, which includes an additional 2000 hectares of property. The property appears to host a high-sulfidation epithermal gold-copper-silver system. Due diligence sampling including 10 rock chip samples from outcrops returned values up to 11.0 g/t gold, 0.63 percent copper and 43 g/t silver.

The Rosales Copper project is made up of 1,450 hectares within the Atacama region of Chile, which hosts multiple large precious metals and base metal mines. The Rosales Project is adjacent to claims that host the currently operating small-scale underground Margarita mine, which lies along a structural trend that continues to the southwest onto the Rosales project. 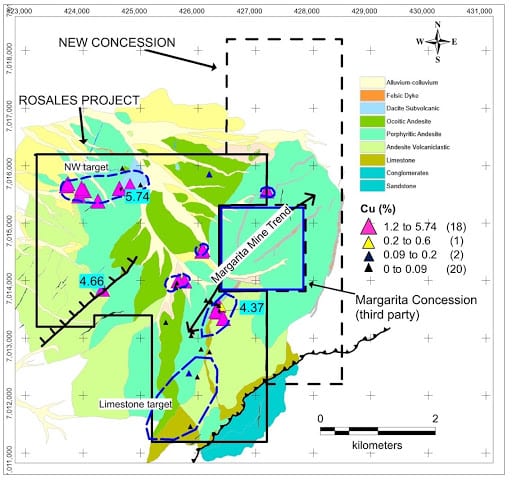 Rosales is located less than 90 kilometers from the mining center of Copiapo, which is home to world-class exploration and mining infrastructure. The Rosales project is accessible by a road that connects to the city.

An initial reconnaissance program at Rosales identified two general areas of prospective mineralization, The Margarita Mine trend (MMT) and the NW Target. The MMT is a 3.5-kilometer-long structural corridor defined by a felsic dyke. Five rock chip samples were taken from the Rosales project, averaging 2.53 percent copper with the highest value returning 4.37 percent copper.

The NW Target is located 2.7 kilometers to the northwest of MMT. The area of mineralization includes outcrops with veinlets and fractures hosting quartz-chalcocite-copper oxides within an area measuring 1,500 by 400 meters. Eight chip samples have been collected from trenches and pits throughout the target area averaging 3.19 percent copper and 13.9 g/t silver with the highest sample returning 5.74 percent copper and 37.1 g/t silver.

Mr. Grosso became one of the early pioneers of the mining sector in Argentina in 1993 when mining was opened to foreign investment and was named Argentina’s ‘Mining Man of The Year’ in 2005. His knowledge of Argentina was instrumental in attracting a premier team which led to the acquisition of key properties in Golden Arrow’s portfolio. He has successfully formed strategic alliances and negotiated with mining industry majors such as Barrick, Teck, Newmont, Viceroy (now Yamana Gold) and Vale S.A., and government officials at all levels. Mr. Grosso’s specialty is financing, negotiations, corporate and marketing strategy, and he was an early and passionate adopter of best practices in environmental protection and socio-economic development through mineral exploration. He is the founder and president of Grosso Group Management Ltd.

Mr. Urquhart is a chartered professional accountant with twenty years of experience working in public practice and industry. Mr. Urquhart operates his own public practice accounting firm offering chief financial officer and accounting services to TSX Venture Exchange listed companies in Vancouver. He has also served as director for some of his corporate clients. Mr. Urquhart began his career working as an audit accountant with Grant Thornton LLP, then later worked as a senior tax accountant with Lohn Caulder Chartered Accountants. Mr. Urquhart obtained his chartered accountant designation in 2001 and is a member of the Chartered Professional Accountants of British Columbia. In 1995, Mr. Urquhart graduated from the University of British Columbia with a Bachelor’s degree in Applied Science in Electrical Engineering.

Mr. McEwen is a professional geologist with more than 30 years of exploration and production experience in open-pit and underground mining projects and operations. The extent of his experience is global in managing numerous projects in Canada, the US, Europe, Asia, Africa, and throughout Latin America. Mr. McEwen’s previous roles include more than a decade with MRDI (AMEC Peru) where he was responsible for project management, economic resource and reserve calculations for various precious and base metal companies worldwide, including BHP Billiton, CM Antamina, Teck, Hochschild, and Phelps Dodge among others.

Mr. Cacos brings over 25 years of management and advisory expertise in the mineral exploration industry. He has worked with Grosso Group since inception and serves as a senior-level executive for all the member companies. Mr. Cacos’ career includes administration and strategic planning for public companies. He currently serves as an officer and director of a number of TSX Venture Exchange-listed companies. He holds a Master of International Management degree from Heidelberg, Germany, and a Bachelor of Science degree from the University of British Columbia.

Ms. Norman is a senior corporate officer with over 18 years of experience within the public company sector providing Corporate Secretarial and Regulatory Compliance services. While her main focus has been on TSX Venture listed issuers, she has also worked with companies listed on the TSX and HKEx.

INN does not provide investment advice and the information on this profile should not be considered a recommendation to buy or sell any security. INN does not endorse or recommend the business, products, services, or securities of any company profiled.

The information contained here is for information purposes only and is not to be construed as an offer or solicitation for the sale or purchase of securities. Readers should conduct their own research for all information publicly available concerning the company. Prior to making any investment decision, it is recommended that readers consult directly with Golden Arrow Resources and seek advice from a qualified investment advisor.