This profile is part of a paid investor education campaign.*

FPX Nickel Corp. (TSXV:FPX) is a Canadian resource company focused on the exploration and development of its wholly-owned advanced development-stage Tier 1 Decar Nickel District project in central British Columbia. The company’s ongoing work on the project continues to show that the Decar Nickel District has the potential to supply high-concentration nickel sulfate and cobalt sulfate suitable for the growing EV battery industry as well as more traditional markets for nickel such as stainless steel.

The Decar Nickel District project hosts the Baptiste deposit, for which FPX Nickel has a 2013 Preliminary Economic Assessment (PEA) and a 2018 updated resource estimate. Together, these NI 43-101 compliant reports show the Baptiste deposit has the potential to become one of the world’s largest-scale, lowest-cost nickel producers. The positive geological interpretation of the Van target at Decar offers further blue sky potential for the property.

In 2020, FPX Nickel is actively working to complete an updated PEA for Baptiste that the company believes will reinforce the attractive capital and operating costs for this project as well as its suitability as feedstock for the EV battery market. Recent leach testing of awaruite nickel concentrates produced from Baptiste achieved nickel recoveries of 98.8 percent to 99.5 percent in the production of a high-purity chemical solution containing 69.4 to 70.1 g/L nickel.

FPX Nickel offers investors exposure to a commodity in a period of long-term structural deficit as nickel supply cannot match demand. The nickel market is projected to be undersupplied for the next several years due to decreasing production and a lack of new mines coming online.

The Decar Nickel District project’s BC address gives FPX Nickel the strategic advantage of operating in a premier jurisdiction for large-scale mine development and operation. Of similar scale to the Decar Nickel District project, New Gold’s (TSX:NGD, NYSEMKT:NGD) C$1.8 billion Blackwater Gold open-pit project in central BC recently received federal and provincial environmental assessment certificates, a key milestone on the path to becoming a fully-permitted mine.

One of FPX Nickel’s long-term goals for the Baptiste deposit is to build a carbon-neutral mining operation. In keeping with that goal, FPX Nickel along with mining companies such as Anglo American majority-owned (LSE:AAL,OTCQX:AAUKF) DeBeers and the Government of Canada, has co-funded a multi-university led research program aimed at studying carbon capture and storage at mining sites.

FPX Nickel’s management team consists of highly experienced capital markets and mining professionals, including Chairman of the Board Dr. Peter Bradshaw and Director Rob Pease. With nearly five decades of mineral exploration experience across 30 countries, Dr. Bradshaw has made numerous key discoveries earning him the honorable distinction of being a Member of the Canadian Mining Hall of Fame. Geologist Rob Pease has more than 30 years of experience in exploration, mine development and construction, including as the former CEO of Terrane Metals during the development of the Mt. Milligan copper–gold mine later acquired by Thompson Creek for C$650 million. Pease also served as the former Director of Richfield Ventures which was acquired along with the Blackwater Gold project by New Gold for C$500 million. 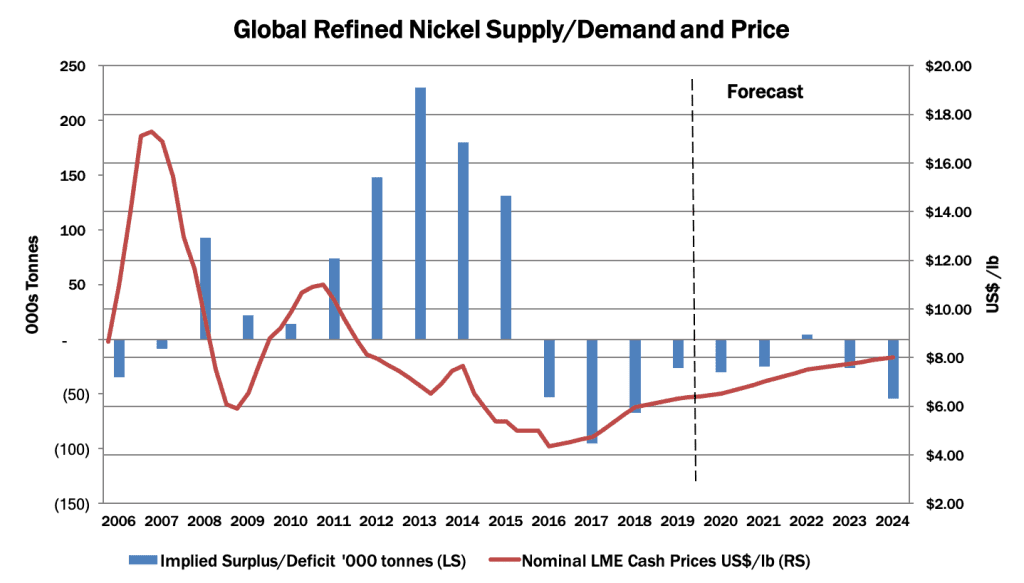 The Decar Nickel District project covers 245 square kilometers and is located 80 kilometers west of the Mt. Milligan mine in central British Columbia. The property is accessible via logging and paved road, with railway and hydropower in close proximity.

FPX Nickel made its first discovery on the property in 2008 following surface sampling. Since 2010, approximately C$25 million has been spent on the exploration and development of the Decar Nickel District. Nickel-iron alloy mineralization has been identified in four target areas within this district, including the Baptiste deposit. 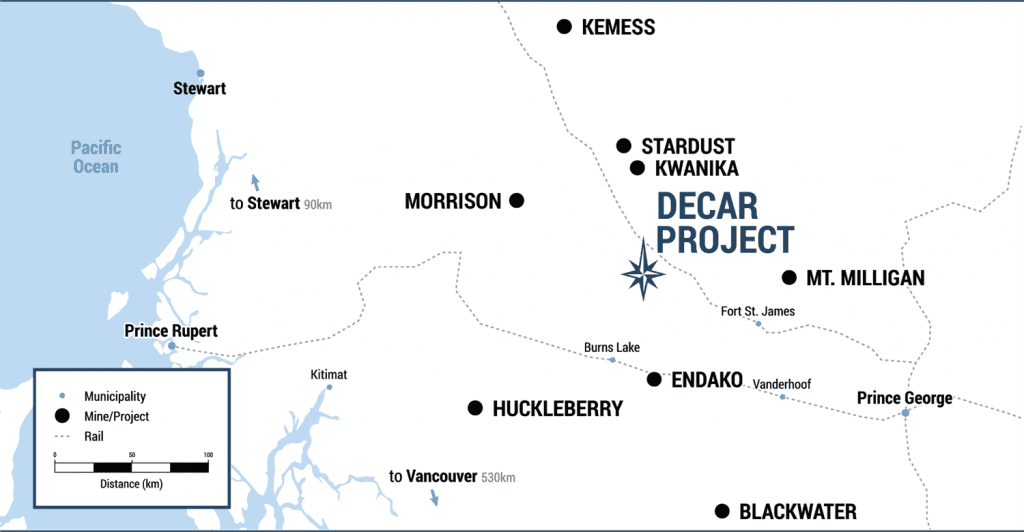 Of the four targets, the Baptiste deposit has been the main focus with a total of 82 holes and over 31,000 meters of diamond drilling completed. 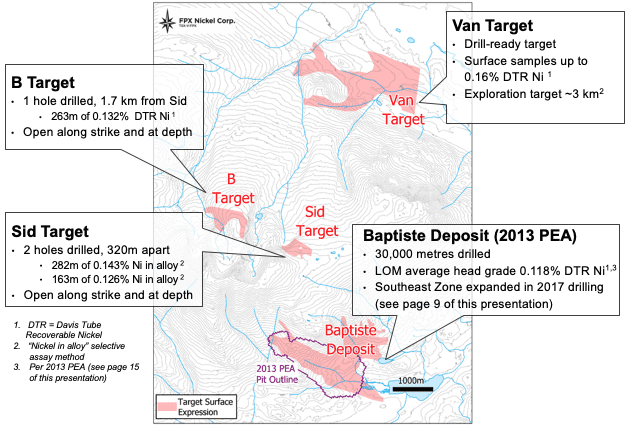 The 2013 PEA and 2018 Mineral Resource Estimate for the Baptiste deposit shows the high degree of potential for a bulk-tonnage, open-pit mining operation.

The results of the 2013 PEA demonstrate the positive potential for establishing a bulk-tonnage, open-pit nickel mine with a low strip ratio. The mine plan includes an on-site magnetic separation and gravity concentration processing plant, using conventional technology and equipment for the production of high-grade nickel product and by-product iron concentrate.

The PEA considers a projected throughput rate of 114,000 TPD (or 40 million TPY) over a mine life of 24 years. Annual production would average 37,369 tonnes, or 82.4 million pounds, of nickel in concentrate at an operating cash cost of C$3.23 per pound. The initial capital cost is estimated at C$1.38 billion, with a payback of 6.4 years. Sustaining capital costs over the life-of-mine are projected to reach C$763 million.

The Baptiste deposit has the potential to be one of the lowest capital and operating cost nickel mines in the world. 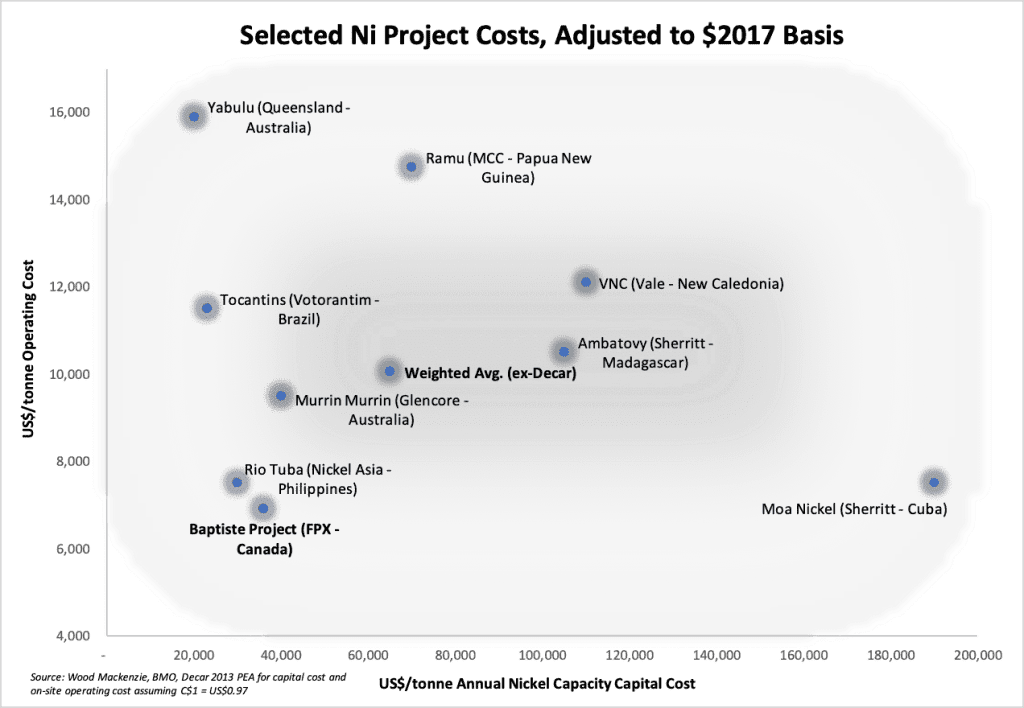 The 2018 mineral resource model for the Baptiste deposit incorporates the results of step-out drilling completed in 2017 in the Southeast Zone. There is potential to improve the Baptiste mine plan in the 2013 PEA by incorporating near-surface tonnage in a starter pit to the southeast of the 2013 PEA pit. 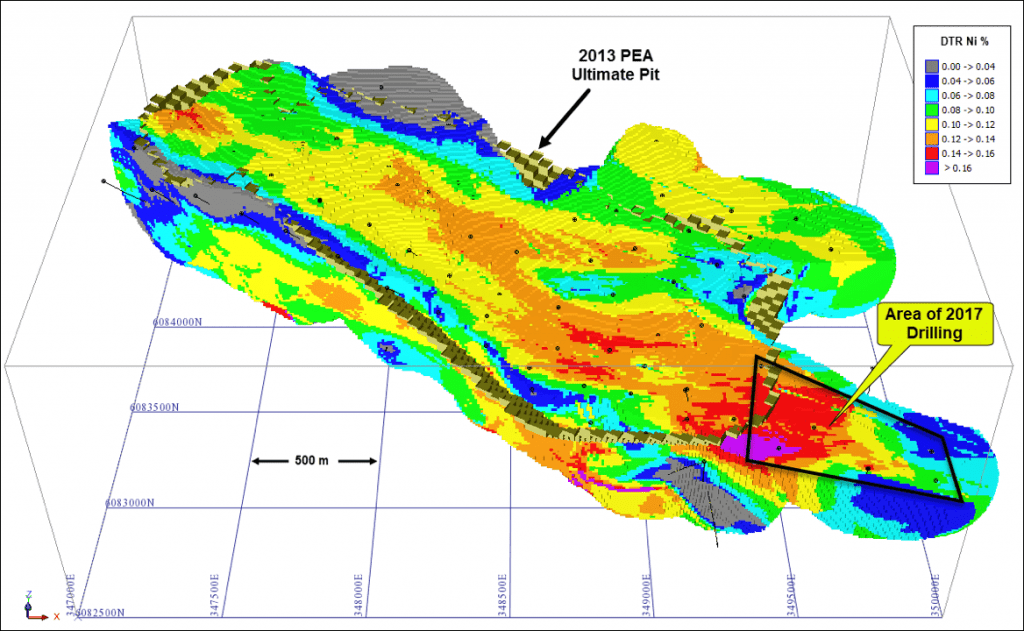 The Van target is a drill-ready zone in the Decar Nickel District, located 6 kilometers north of Baptiste. Van is currently measuring approximately 3 square kilometers based on 54 bedrock surface samples. Comparatively, the Baptiste target measured approximately 2 square kilometers prior to initial drilling in 2010. Close to 35 percent of surface samples in the Van Target area grade from over 0.12 percent DTR nickel to as high as 0.16 percent DTR nickel. 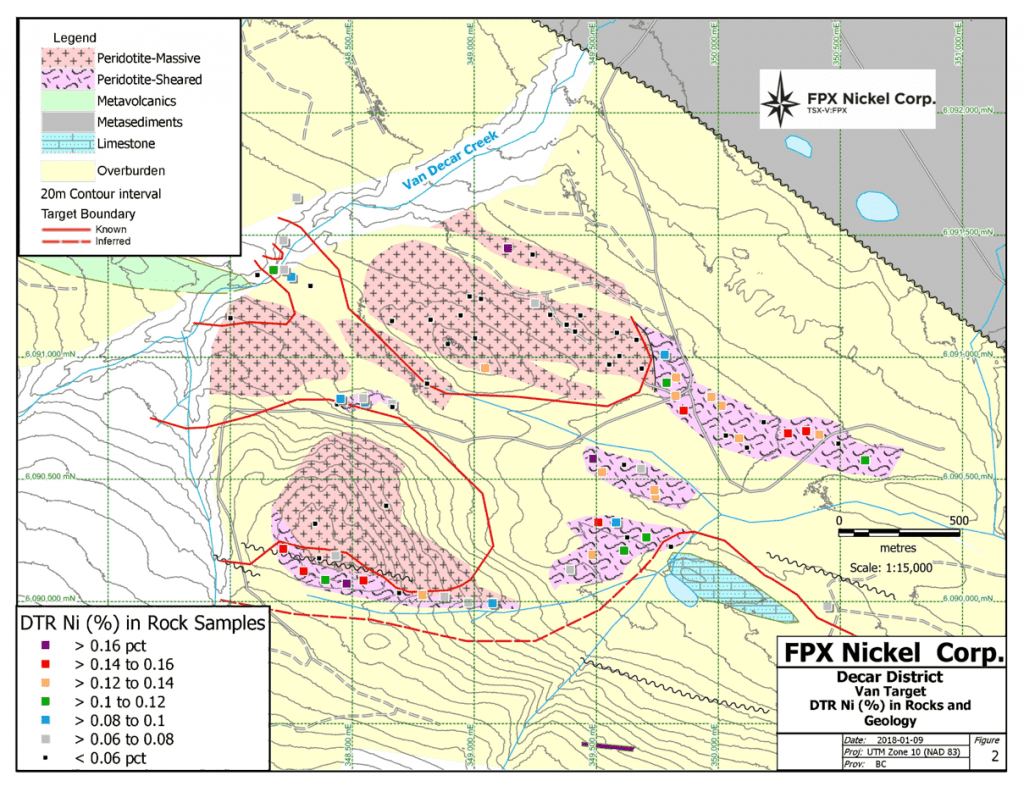 In early 2020, FPX Nickel announced the results from a successful leach testing of awaruite nickel concentrates from the Decar Nickel District. The results confirmed the amenability of Decar nickel concentrate to a simple 3-stage process to achieve nickel recoveries of 98.8 percent to 99.5 percent in the production of a high-purity chemical solution containing 69.4 to 70.1 g/L nickel.

In addition, these mild pressure leaching conditions can also lead to rapid nickel extraction with over 98 percent extraction in under 60 minutes at significantly lower sizing, power consumption, pressure and temperature requirements than typical HPAL operations. This process eliminates the need for smelting prior to downstream processing.

“These results confirm a breakthrough for FPX Nickel, demonstrating that Decar has the potential to produce significant quantities of nickel and cobalt in a high-quality form for the fast-growing EV battery supply chain,” said FPX Nickel President and CEO Martin Turenne. “The results further confirm that the awaruite nickel ore at Decar has potential technical advantages over sulfide and laterite ores for producing nickel sulfate and cobalt sulfate.” 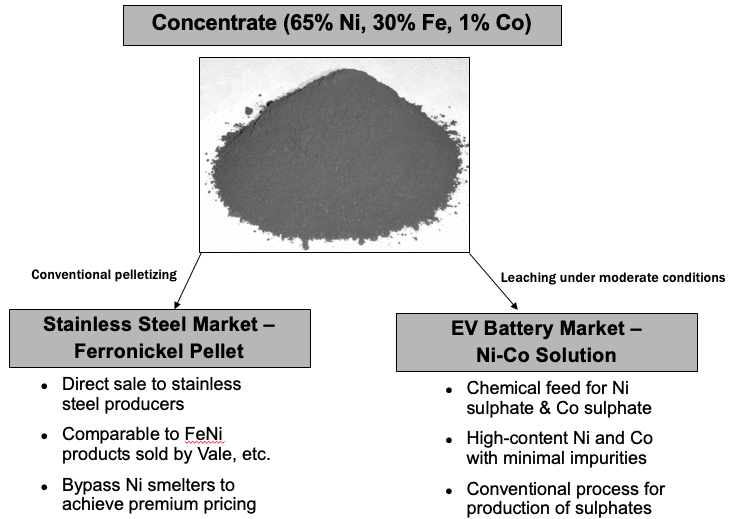 The Decar Nickel District project contains little or no sulfides, nearly eradicating the potential for acid mine drainage. Initial metallurgical test work demonstrates the nickel-iron alloy at Baptiste can be recovered without the use of chemical reagents as well as at lower temperatures and lower power consumption, thereby significantly reducing the potential environmental impact of the project’s mining operations. Cutting out the need for smelting–a highly pollutive industrial activity– also has the potential to significantly reduce the environmental footprint of producing energy metals for the EV battery industry.

In further pursuit of its environmental sustainability goals, FPX Nickel is co-funding a research program aimed at studying carbon capture and storage at mining sites. The research program is a collaboration between academic institutions such as the University of British Columbia and Trent University and builds on more than a decade of research on technologies that maximize the reaction between CO2 and magnesium silicate mine tailings.

In a paper presented to the Resources for Future Generations conference in 2018, leading carbon sequestration researcher Dr. Ian Power of Trent University noted that FXP Nickel’s Decar Nickel District’s Baptiste deposit “offers a tremendous opportunity for developing a carbon-neutral mine.”

Martin Turenne is a senior executive with over 15 years’ experience in the commodities industry, including over 5 years in the mining industry. He has extensive leadership experience in strategic management, fundraising, economic analysis, financial reporting, regulatory compliance and corporate tax. Turenne formerly served as CFO of First Point Minerals Corp. from 2012 to 2015, and in positions at KPMG LLP and Methanex Corporation. He is a member of the Canadian Institute of Chartered Accountants.

Trevor Rabb is a professional geologist with over 10 years of experience in mineral exploration, including over 5 years specializing in nickel-iron alloy deposits. Rabb formerly served as First Point’s Senior Geologist and Vice-President Exploration from 2010 to 2016. He was a key player in exploration discoveries for First Point’s Decar, Mich, Wale and Klow properties.

Christopher Mitchell is a business consultant with more than 40 years of experience in the mineral industry. He served as Senior Vice President of Viceroy Resource Corp., Executive Vice President and CFO of Orvana Minerals Corp. Mitchell holds MBA and M.Sc. degrees, University of British Columbia, and is a member of the Association of Professional Engineers of British Columbia. He is also a Director of Endurance Gold Corp.

Rob Pease is a geologist with over 30 years of experience in exploration, mine development and construction. He served as the former CEO of Terrane Metals (Mt. Milligan copper-gold mine, central British Columbia), acquired by Thompson Creek for $650 million. Pease also served as the former Director of Richfield Ventures (Blackwater gold project, central British Columbia), acquired by New Gold for $500 million. He is a Director of Pure Gold Mining Inc. and Liberty Gold Corp.

William Myckatyn is a mining engineer with over 34 years of experience in the mining industry. Myckatyn is the Founder and CEO of Quadra Mining Ltd. He served as Chairman and subsequently Co-Chairman of Quadra FNX Mining until its takeover in 2012. Prior to Quadra, Myckatyn was Chairman, President and CEO of Dayton Mining Corp. where he led the restructuring and merger with Pacific Rim Mining Corp. He also served as the former President and CEO of Princeton Mining and Gibraltar Mines Ltd. For over 17 years he worked for various operations controlled by Placer Dome Inc. and its associated predecessor companies including four separate mines in Australia and the Philippines. He is a Director of San Marco Resources and OceanaGold.

Dr. John McDonald is a geologist with more than 40 years of international experience as both a professor and mineral explorer. He served as VP Exploration for both Diamondex and Winspear Diamonds Inc., where he and his technical team were directly responsible for the discovery and development of the Snap Lake diamond deposit. De Beers acquired Winspear’s majority ownership in the Snap Lake deposit for $305 million in 2000. In 2000, McDonald received the HH “Spud” Huestis Award for excellence in prospecting and mineral exploration from the B.C. and Yukon Chamber of Mines. In January 2008, he received the Hugo Dummett Diamond Award for Excellence in Diamond Exploration and Development. He is a Director of Canterra Minerals Corp., Hudson Resources Inc., and Independence Gold Corp.

The information contained here is for information purposes only and is not to be construed as an offer or solicitation for the sale or purchase of securities. Readers should conduct their own research for all information publicly available concerning the company. Prior to making any investment decision, it is recommended that readers consult directly with FPX Nickel Corp and seek advice from a qualified investment advisor.