This Emerita Resources profile is part of a paid investor education campaign.*

Emerita Resources is also in the process of acquiring two additional properties in southern Spain: Aznalcollar and Paymogo. Each property has defined deposits that the company is interested in developing further.

Heading Emerita Resources’ management team is CEO David Gower and President Joaquin Merino-Marquez. Gower brings over 20 years of experience in mineral exploration and has made brownfield discoveries at Raglan and Sudbury, Matagami, Falcondo and greenfield discoveries at Araguaia, Kabanga and Amazonas. Merino-Marquez is a professional geologist with over 20 years of experience in the mining industry and has extensive international experience in South America, Europe and Asia-Pacific. Management holds approximately 12 percent of the company’s shares.

In October 2017, Emerita Resources and its joint venture partner Aldesa, a major Spanish construction and infrastructure firm with international operations, acquired the 3,600-hectare Plaza Norte project through a public tender process. Emerita and Aldesa each own 50 percent of the project but Emerita is the primary operator on the project. The rights to Plaza Norte have been granted for an initial three-year term with the option to renew.

The property is located in the Cantabria region in northern Spain and resides in the Reocin mining district. The Cantabria region is known for its infrastructure which includes an industrial port and excellent rail and road network. The property is adjacent to the past-producing Reocin mine, which produced approximately 62 million tonnes grading 11 percent zinc and 1.4 percent lead, and hosts mineralization extensions from the mine. Glencore’s (LSE:GLEN) San Juan de la Nieva zinc smelter is approximately 180 kilometers to the west of the property. 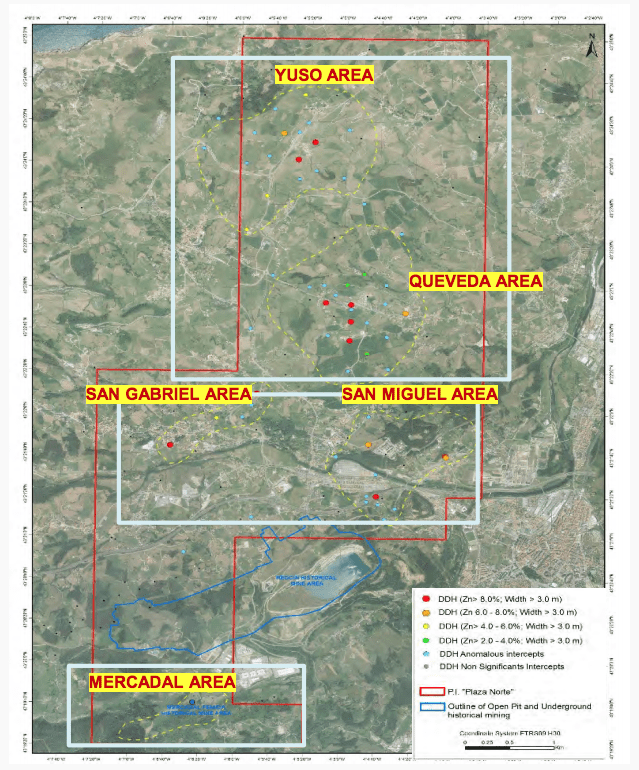 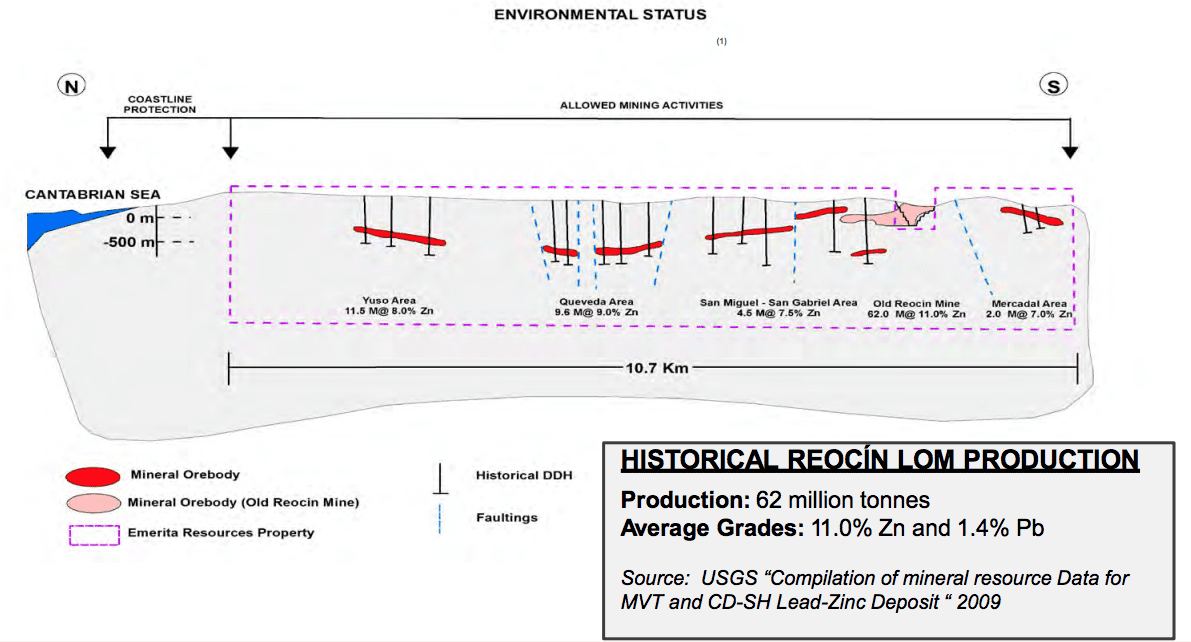 In 2019, Emerita Resource initiated its first drill program on the property which is focused on establishing a NI 43-101-compliant mineral resource estimate. The company is following up on drill intercepts identified by a previous operator. The program marks the first systematic exploration program in the region since the Reocin mine closed in 2003. Emerita Resources has been drilling on the 1.3-kilometer by one-kilometer Queveda target. Two holes have been completed on the property to date. Initial results include a four-meter intercept grading 9.02 percent zinc within a wider mineralized zone of 9.5 meters grading 4.57 percent zinc.

Emerita Resources is working towards releasing its mineral resource estimate for Plaza Norte within a year. After that, the company intends to establish a PEA and to continue drilling on other high-priority targets to expand the resource.

David Gower is the President of Brazil Potash Corp. which has discovered the largest and highest-grade potash deposit to date in Brazil. He has over 20 years of experience in exploration with Falconbridge, (now Xstrata/Glencore) most recently as Director of Global Nickel and PGM exploration. He was a member of the Senior Operating Team for mining projects with Falconbridge. He has led exploration teams that made brownfield discoveries at Raglan and Sudbury, Matagami, Falcondo and greenfield discoveries at Araguaia in Brazil, Kabanga in Tanzania and Amazonas in Brazil. He has held executive and director positions with several junior and midsize mining companies for the past 10 years.

Joaquin Merino-Marquez is a professional geologist with 20 years of experience in the mining industry. He was previously Vice President Exploration for Primero Mining Corp. and before that Vice President Exploration for Apogee Minerals Ltd. Previously, he was the exploration manager for Placer Dome at Porgera mine and a mine geologist at Hecla Mining’s La Camorra mine. He has extensive international experience in South America, Europe and Asia-Pacific. Merino-Marquez holds a M.Sc. from Queens University, and a B.Sc. in Geology from the University of Seville (Spain). He is a member of the Association of Professional Geoscientists of Ontario.

Greg Duras has over 10 years of corporate and project finance experience in the resource sector. Some of his previous positions include, Vice President of Finance and Administration at S.C. Rosia Montana Gold Corporation S.A. (RMGC), a mineral exploration and mining development company based in Romania. He has also held a number of senior finance roles, including Controller of TSX-listed Gabriel Resources Ltd. and High River Gold Mines Ltd. He is a Certified General Accountant and a Certified Professional Accountant, and holds a Bachelor of Administration from Lakehead University.

Damian Lopez is a corporate securities lawyer who works as a legal consultant to various TSX and TSXV-listed companies. He previously worked as a securities and M&A lawyer at a large Toronto corporate legal firm, where he worked on a variety of corporate and commercial transactions. Lopez obtained a Juris Doctor from Osgoode Hall and he received a Bachelor of Commerce with a major in Economics from Rotman Commerce at the University of Toronto. He is also a director of the Canadian Hispanic Bar Association.

Marilia Bento has over 20 years of experience in the financial industry and Canadian capital markets. Some of her previous positions include, Managing Director and Head of Equity Capital Markets Canada at Macquarie Capital Markets Canada Ltd. (formerly Orion Securities Inc.) and Vice President of Corporate Development for various resource companies. She was on the Board of Directors of Orion Securities Inc. and has been a board member of junior mining companies.

Lawrence Guy is Chief Executive Officer of North 52nd Asset Management Inc. Previously, he was a Portfolio Manager with Aston Hill Financial Inc. Prior to Aston Hill, he was Chief Financial Officer and Director of Navina Asset Management Inc., a company he co-founded that was subsequently acquired by Aston Hill Financial Inc. He has also held senior offices at Fairway Capital Management Corp. and First Trust Portfolios Canada Inc. He holds a Bachelor of Arts (Economics) degree from the University of Western Ontario and is a Chartered Financial Analyst.

Catherine Stretch is the Chief Commercial Officer of Aguia Resources Limited, an ASX and TSXV-listed company engaged in the exploration and development of phosphate and copper assets in Brazil. She has 20 years of experience in capital markets with a particular focus on the formation, development and operation of resource companies. She has a Bachelor of Arts in Economics and History from Western University and a Masters of Business Administration from the Schulich School of Business at York University.

The information contained here is for information purposes only and is not to be construed as an offer or solicitation for the sale or purchase of securities. Readers should conduct their own research for all information publicly available concerning the company. Prior to making any investment decision, it is recommended that readers consult directly with Emerita Resources Corp. and seek advice from a qualified investment advisor.