Here’s an overview of the main factors that impacted the rare earths market in H1 2020,...

Ways to Invest in Rare Earths

A brief look at the rare earth elements market and how to start investing in the...

Should you invest in the rare earth market?

Read our outlook report this 2020!

“The availability of good finance, technical development of flowsheets and securing downstream consumers for their products...

Law firm Fasken hosted a webinar on developing critical minerals supply, including perspectives from the US,... 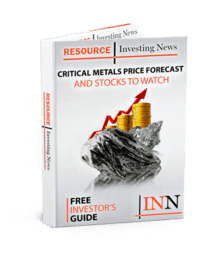 Critical metals are a crucial component in new technologies

Get your free 2020 outlook report on critical metals investing!

Can North America establish a rare earths supply chain without China? And why is copper looking...

<< Older Posts
The 17 rare earth elements (REEs) are as diverse as they are challenging to pronounce. The group is made up of 15 lanthanides, plus yttrium and scandium, and each has different applications, pricing and supply and demand dynamics. Sound complicated? While the REE space is undeniably complex, many investors find it compelling and are interested in finding ways to get a foot in the door. Read on for a more in-depth look at the rare earths market and the many different REEs, plus a brief explanation of how to start investing. Rare earth elements market: Types of rare earths There are a number of ways to categorize and better understand REEs. For example, rare earths are often divided into “heavy”...

The 17 rare earth elements (REEs) are as diverse as they are challenging to pronounce. The group is made up of 15 lanthanides, plus yttrium and scandium, and each has different applications, pricing and supply and demand dynamics.

Sound complicated? While the REE space is undeniably complex, many investors find it compelling and are interested in finding ways to get a foot in the door. Read on for a more in-depth look at the rare earths market and the many different REEs, plus a brief explanation of how to start investing.

There are a number of ways to categorize and better understand REEs. For example, rare earths are often divided into “heavy” and “light” categories based on their atomic weight. Heavy rare earths are generally more sought after, but light REEs can, of course, be important too.

Rare earths can also be grouped together according to how they are used. Rare earths used to make magnets include praseodymium, neodymium, samarium and dysprosium, while phosphor rare earths — those used in lighting — include europium, terbium and yttrium. Cerium, lanthanum and gadolinium are sometimes included in the phosphor category as well.

You can click here to learn more about heavy and light rare earths, and here for more information about the different uses of rare earths.

One thing that is common to all the rare earths is that price information is not readily available — like other critical metals, rare earth materials are not traded on a public exchange. That said, some research firms do make pricing details available on occasion, sometimes for a fee.

The Chinese monopoly on rare earths production has created problems in the rare earths metals market in the past. For instance, rare earths prices in the global market spiked in 2010 and 2011 when the country imposed export quotas.

The move sparked a boom in global exploration for rare earths outside of China, but many companies that entered the space at that time fell off the radar when rare earths prices eventually fell again. Molycorp, once North America’s only producer of rare earths, is one notable failure in the drive to produce the metals outside of China. It filed for bankruptcy in 2015.

China no longer has REE export quotas in place. In 2014, the World Trade Organization ruled against them, and China removed the restrictions in 2015.

Despite its key role in the rare earths space, China has long had problems with illegal mining. As part of its 12th Five Year Plan, the country closed 14 illegal rare earths mines as well as 28 companies.

The overhaul of the sector is expected to continue during the 13th Five Year Plan, which will run from 2016 to 2020. As part of its efforts to curb illegal rare earths mining, China announced that it will limit its annual rare earths output to 140,000 MT by 2020.

Is Trump Good for the Gold Price?


Get expert opinions in our free report.

Outside of China, one of the world’s leading rare earth producers is Australian company Lynas (ASX:LYC,OTC Pink:LYSCF). The company mines for rare earth metals then sends the raw materials for refining and processing at its plant in Malaysia.

Many analysts believe demand for rare earths will boom from 2020 onwards as growth rates for top end-use categories, including electric vehicles and other high-tech applications, accelerate.

Demand for dysprosium, a key material in steel manufacturing and the production of lasers, has grown as countries increase their steel standards.

Rare earth raw materials have long been used in televisions and rechargeable batteries, two industries that accounted for much of the rare earth market share before the proliferation of new technology.

Other rare earth metals are used in wind turbines, aluminum production, catalytic converters and many of the high-tech products we use everyday.

Securing rare earth supply is an increasingly important issue. In addition to traditional rare earth mining, there has been growth in the rare earth recycling industry, which aims to recover REE raw materials from electronics and high-tech products in order to reuse them in new ways.

Exploring and extracting rare earth materials from deep-sea mud is one of the newest recovery methods and is gaining traction as more mining companies look offshore for resources.

There has also been growth in the amount of countries looking to secure domestic supply of rare earth production to meet the growing rare earth metals demand in the technology sector and manufacturing industry.

For that reason, the most strategic and direct way to invest in rare earths industry is through mining and exploration companies. While many such companies are located in China and are not publicly traded, there are still some that are accessible. Below is a list of rare earths-focused companies trading on the TSXV, TSX and ASX; all had market caps of over $50 million as of May 13, 2019.

Some small-cap REE companies are also listed on those exchanges. Here’s a list of rare earths companies listed on the TSXV, TSX and ASX that had market caps of less than $50 million as of May 13, 2019:

If we missed a rare earths company that meets the above criteria, please let us know in the comments.